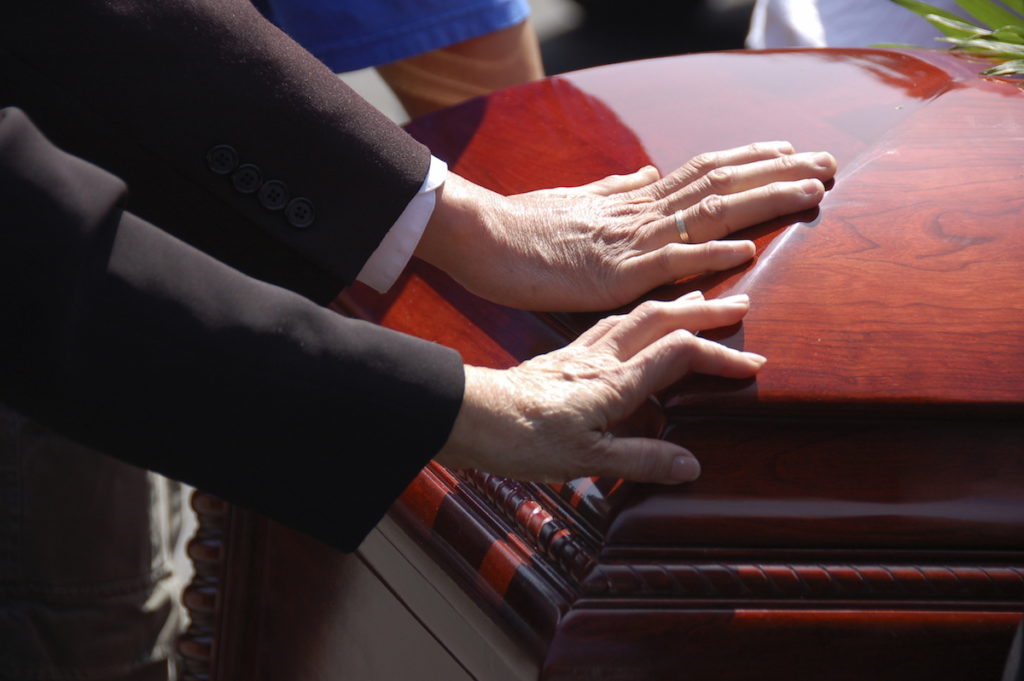 If ever there were a time for decorum to be upheld, it is at a funeral, memorial, or graveside service. A processional accompanied by a Dixieland band may be a time to celebrate joyfully the life of the deceased, but the service itself requires a respectful presence.

It’s simple: Sit quietly, and don’t get up during the service. The exception is when you have a cough that won’t stop or you have to quiet a crying or unruly child; in both cases, quickly go to the vestibule or lobby. If a eulogy or tribute to the deceased is sprinkled with humor, it’s fine to laugh, though not raucously.

Clothing
Because the nature of funerals and memorial services varies so widely today, attire isn’t limited to just black or dark gray. The exception may be when you’re a pallbearer or honorary pallbearer, in which case a dark suit is the usual attire unless the family requests something else. Remember, though, that it is a serious occasion and your attire should reflect that, especially if you are participating in the service. At the very least it should be clean, neat, and pressed as for any other important occasion.

Arriving
When attending a service, be on time and enter the house of worship or location where the funeral will be held as quietly as possible. If there are no ushers, remember that the seats closer to the front should be taken by very close friends, with acquaintances seating themselves in the middle or towards the rear.

If you arrive late, enter a row from a side aisle, not the center aisle. If a processional has begun, wait outside instead of trying to squeeze past those who are a part of the cortege and are waiting to walk down the aisle.

Smartphone Use
Cell phones and smartphones should be off or completely silent (not set to vibrate, which can still be audible during quiet moments) during any service. If silent rather than off, they should be kept away during the entire duration of the service, from waiting for the service to begin while assembled to mingling with others afterward. Out of respect, you should 100% present at all times—glancing at a phone even for a moment destroys that impression. Photos should not be taken during the ceremony, but may be taken of groups of people who don’t usually get to see one another if done away from any mourners.

Processionals
At some funerals, the coffin is brought in as part of a processional. The officiant and the choir (if any) lead the funeral procession. Directly after come the honorary pallbearers, two by two, preceding the coffin, brought by assistants from the funeral home or the pallbearers carry the coffin. Unless they have chosen to be seated beforehand, the family comes next, chief mourner(s) first, walking with whomever he or she chooses. Close friends may follow, completing the procession. The family and pallbearers occupy the front rows, with friends filling vacant places on either side. The service begins when everyone is seated.

At memorial services and at a funeral where the coffin or urn is already present, there is no processional. In these cases, the service starts after the family and officiant enter, usually from a front side or door.

Children
Children should be encouraged to attend the ceremonies surrounding the death of a family member or close friend to whatever degree they feel comfortable. Children learn through these experiences that death is a natural part of life and that rites are observed when someone dies.

Always consider a child’s age before taking her to a funeral, memorial service, or a prolonged visitation. Because young children can become restless or have trouble staying quiet, you may choose to have them stay at home with a sitter, or bring a sitter who can take them home if needed.

Older children should sit with their family, closest to whomever can give them the most comfort. The children should wear clothing that’s age appropriate and similar in style to that worn by adult family members. Generally, children do not wear black.

Recessionals
A recessional ends the service, whether a processional took place or not. As a rule, the officiant leads the honorary pallbearers, followed by the coffin (carried or guided by the pallbearers), and then the members of the immediate family. At a memorial service the officiant leads the family out through the same door they entered. The immediate family leaves first, followed by the other relatives.

It’s common practice for one or more of the relatives to stop at the back of the church or outside to briefly thank those who have attended the service, with perhaps a special word to close friends.

If the deceased is to be buried following the service, the site of the interment will be announced. Unless the grave site is on the place of worship’s grounds, a processional of cars will form to drive to the cemetery. Everyone attending is welcome to follow the family to the grave site service unless the burial is private—that is, attended by immediate family only—but no one is obliged to attend. As the casket is lifted into the hearse, the family enters cars or limousines waiting immediately behind. The after-service protocol for a cremation or mausoleum interment is the same as that for a burial.

The coffin is usually placed graveside at the cemetery, with flowers that were sent to the funeral home or house of worship placed around it. The officiant says the prayers common to the rite of burial, and a eulogy may be given as well. At the end of the service, no cortege is formed, so attendees may leave as they wish.

Honoring a life means acknowledging the uniqueness of the deceased: their personality, life choices, and the path they walked in life. Plan for peace of mind. Want one-on-one assistance? Feel free to give us a call. 904-824-1672